Happy Women’s History Month everyone! As a woman, I wanted to take the time to celebrate women in literature this month, today I want to talk about some of my favorite female authors and how they have impacted and inspired me and my love of reading.

I think in a world that has always been very dominated by men, especially since it was a lot less “acceptable” for women to be successful authors in our history, it is important to reflect on the great work that women have done in the literary world. 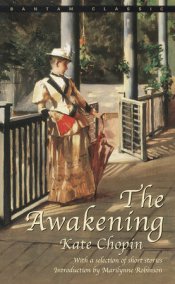 Born in 1850, Chopin is now considered to be one of the best female authors of her time. Some of her most influential short stories are “Desiree’s Baby”, “The Story of an Hour” and “The Storm”, and her novel The Awakening is one of the first pieces of work that addresses womens issues without condescension. The Awakening and “The Story of an Hour” are both stories that have stuck with me since I read them. The Awakening tells the story of Edna Pontellier, who starts to figure out who she is as her own person; learning she has her own wants, needs and desires, separate from her life as a wife and mother. “The Story of an Hour” is the tale of Mrs. Mallard and the hour in her life after learning that her husband has passed away, and the drastic changes to a person’s sense of self that can happen in an hour. Both of these pieces of literature I read in college and I have continued to pick them up and reread them throughout the years. Both of them deal with the idea of freedom and femininity, and how learning who you are as a woman, as a whole person, can bring you freedom.

“but whatever came, she had resolved never again to belong to another than herself.” – Kate Chopin, The Awakening.

Gilman who was born in 1860, has been a role model for many feminists going forward due to the lifestyle that she lived and the views that she held. Her most famous piece of work “The Yellow Wallpaper” is one that is semi autobiographical – after having been given the “rest cure” (being confined to bed in order to treat an illness, usually in the case of “hysteria” in women) after developing severe postpartum psychosis after her daughter was born. The Yellow Wallpaper discusses how the lack of women’s autonomy is detrimental to them, mentally, emotionally and physically. This is another short story that I read while I was in college, and one of the things that struck me is how women’s mental health has been treated throughout history. Women were told that they are mentally ill by the very people who are preventing them from becoming well and happy, by forcing them into reclusiveness and forcing them to renounce their own personhood to become strictly a wife and mother.

“There are things in that paper that nobody knows but me, or ever will.” – Charlotte Perkins Gilman, “The Yellow Wallpaper.

Adrienne Rich was a feminist icon, becoming heavily involved with anti-war, civil rights and feminist activism in the 1960s. She was an essayist and poet and her poetry is some of the most beautiful prose I have ever read. She writes in a way that even a person who doesn’t love poetry would enjoy it. My favorite book of her poetry is The Dream of a Common Language. Published after she came out as a lesbian in 1976, she splits the book into three sections: The Power, Twenty-One Love Poems, and Not Somewhere Else, But Here. “The Power” is a section of poetry talking about individual women and their accomplishments while she relates these accomplishments to women in general at the same time. “Twenty-One Love Poems” is a section in which she discusses the love that women have for each other and the way that our culture denies the existence of that kind of love. The section, “Not Somewhere Else, But Here” talks about the relationship between women and nature. All of these poems are some of the most moving poems I have read.

“No one’s fated or doomed to love anyone. / The accidents happen, we’re not heroines, / they happen in our lives like car crashes, / books that change us, neighborhoods / we move into and come to love.” – Adrienne Rich, The Dream of a Common Language.

One of the things that I love most about Virginia Woolf’s prose is that she so often uses almost a stream of consciousness way of writing her novels. Most of her novels you get most of the depth from them when you are looking introspectively into the characters as they are thinking about and reacting to the things that are happening around them. In To The Lighthouse there is no specific narrator, instead it relies on the shifting perspectives of the characters to tell the story. As with many women of the time, Virginia Woolf also struggled with mental illness and the lack of compassion and understanding that went along with it.

Jane Eyre is a novel that has stuck with me ever since I read it. Jane Erye is a classic for a reason, and it’s the way that Bronte wrote it, and how she wrote her character that makes it stick around. Bronte has been called “the first historian of the private consciousness” for the way that she writes about the inferior life that women were being forced into leading and the way she exposed a woman’s thoughts and feelings throughout the novel.

“I am no bird; and no net ensnares me: I am a free human being with an independent will.” – Charlotte Bronte, Jane Eyre.

Edith Wharton was a writer, designer, and the first woman to win the Pulitzer Prize when she won it in 1921 for The Age of Innocence. Her novels focus on the lives of those who lived during the nineteenth century when wealth was declining. The craftsmanship, and the subtle ironies and hypocrisies that are woven throughout all of Wharton’s novels should be admired as she consistently discusses the class system and money, while still exploring the individual characters themselves. In reading the The Age of Innocence in todays world, Ellen Olenska becomes a feminist character struggling with her identity as a woman and what it means to live her own life. At the same time, May Welland is now seen as manipulative when she was only using what means she had at her disposal to save what was important to her – her marriage. Wharton’s prose when it comes to her descriptions are what really give you depth to what is going on around these characters, the attention to detail is immaculate.

“And you’ll sit beside me, and we’ll look, not at visions, but at realities.” – Edith Wharton, The Age of Innocence.

Anne Sexton and the next author on my list, are two of my very favorite poets. Sexton is often grouped in with other poets who write Confessional Poetry, poetry that often focuses on their individual experiences. Often her poems are considered autobiographical, which caused her to become known for writing poems about topics that were often not discussed, like her long battle with depression and suicidal thoughts, but also her personal relationships. Sexton struggled with depression her whole life, spending time in and out of hospitals, which ultimately caused her to take her own life. Her ability to turn her pain into beautiful prose that sings is something that inspires me in my efforts to write.

“I am stuffing your mouth with your
promises and watching
you vomit them out upon my face.” – Anne Sexton, “Killing the Love”.

Sylvia Plath was also grouped together with poets who wrote confessional poetry, although she is given a lot of the credit for advancing it. Plath was a poet, a novelist and a short story writer who suffered from depression. Throughout her writing, she discusses her struggles with mental illness quite thoroughly. The Bell Jar is a semi-autobiographical novel she stated was about describing the loneliness that one feels while suffering a breakdown. Plath spent time in mental hospitals and was even treated for her depression with Electroshock Therapy. Like Sexton, Plath famously committed suicide shortly after The Bell Jar was published. Her journals have always been something that has spoken to me, everything she talks about regarding her relationships and her struggle with mental illness is amazing to read. How much of themselves that Plath and Sexton put into their writing is overwhelming to read sometimes. 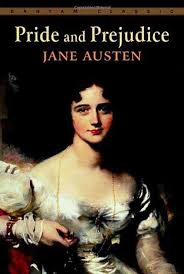 Jane Austen is a staple for many people who have a love of books, and her novel Pride and Prejudice is one of the most popular examples of English literature. In a lot of Austens work, the major theme is the importance of the upbringing and the environment in which her young characters grow up, and the idea that a good marriage is one of the most important things a woman can accomplish as that is one of the only ways to bring her into a place of good standing and class. In Pride and Prejudice Austin looks at marriage and what a good marriage is vs. what a bad marriage is. Is a good marriage one that is for love, or is it for money, or maybe is it a combination of both? Throughout the novel, as the characters interact and come closer to the end it is obvious that Elizabeth and Darcy love each other, but Elizabeth does still come out on top with an higher place in society and more money then she had prior to her marriage.

“There is a stubbornness about me that never can bear to be frightened at the will of others. My courage always rises at every attempt to intimidate me.” – Jane Austen, Pride and Prejudice.

Margaret Atwood is a novelist, poet, activist and many other things and the way that she writes is incredibly moving and upsetting all at the same time. While Atwood has never actively put the label of feminist on her writing, it is pretty hard to ignore the politics of most of her novels, like The Handmaid’s Tale, or The Heart Goes Last, as feminist. Her novels are often focused on the issues of female sexuality, relationships, and the brutality of men in a patriarchal society and the way that women suffer at the hands of men. Her novels never seem to be something that won’t ever happen, too often in fact they seem to be very possible if only a few key changes were to happen in our modern day world, and I think that is one of the things that intrigues and terrifies me most about Atwood’s writing.

“The past is so much safer, because whatever’s in it has already happened. It can’t be changed; so, in a way, there’s nothing to dread.” – Margaret Atwood, The Heart Goes Last. 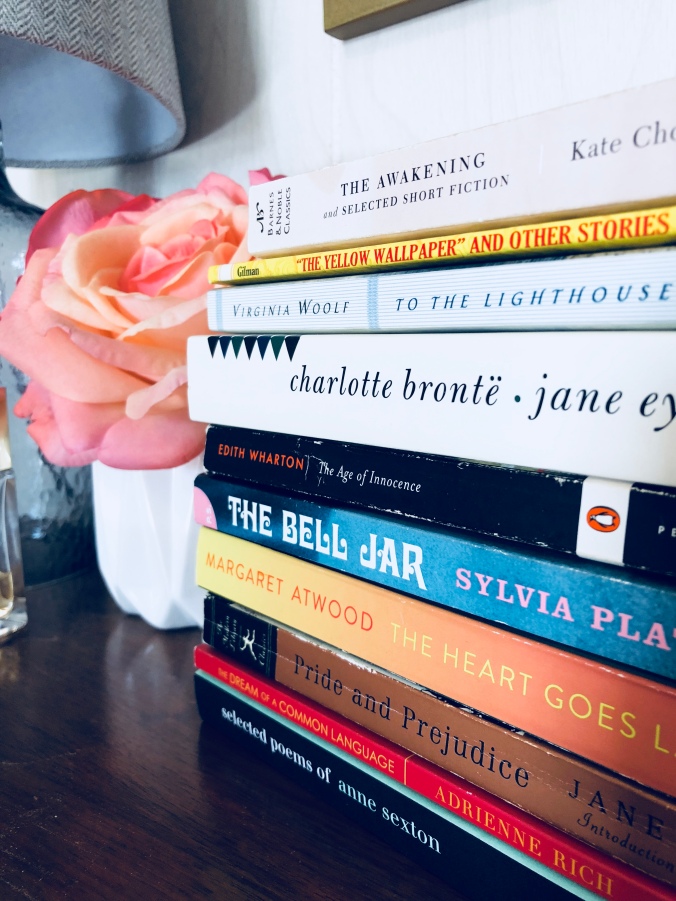 Most of the authors that I identify with do share a lot of the same qualities, often they are writing about things like feminism, female sexuality, and mental illness. And more often than not, a lot of them suffer from their own mental illnesses. It is inspiring to me to see women putting their own personal struggles into their writing so that they can do something bigger with it. Allowing other people to find peace from their own demons through reading about theirs.

Did I miss any of your favorite female authors? Whose writing has inspired or impacted you?