Synopsis from Goodreads: “In a future so real and near it might be now, something happens when women go to sleep; they become shrouded in a cocoon-like gauze. If they are awakened, if the gauze wrapping their bodies is disturbed or violated, the women become feral and spectacularly violent; and while they sleep they go to another place… The men of our world are abandoned, left to their increasingly primal devices. One woman, however, the mysterious Evie, is immune to the blessing or curse of the sleeping disease. Is Evie a medical anomaly to be studied? Or is she a demon who must be slain? Set in a small Appalachian town whose primary employer is a women’s prison, Sleeping Beauties is a wildly provocative, gloriously absorbing father/son collaboration between Stephen King and Owen King.” 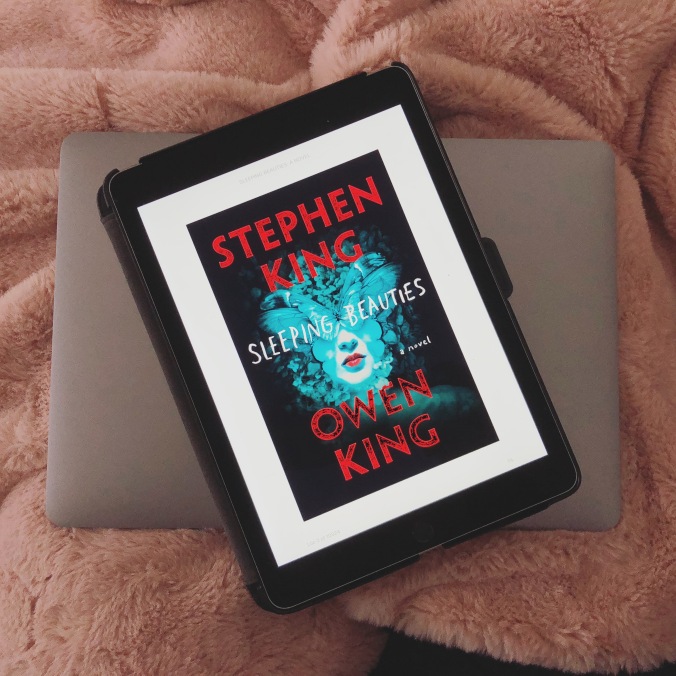 This was my IRL book clubs first book pick. It did not go over so well. Out of the six of us only two, myself included, actually finished the book. Nobody else was able to get into it and part of this I blame on the deadly pacing at the beginning of the book.  The beginning of the book drags as we get introduced to the characters, and while the book seems to pick up steam once the Aurora virus gets started, it doesn’t keep the pace for the rest of the novel. There were plenty of times that I felt like I needed the pick up of caffeine in order to stay awake for this just like the woman of Dooling WV.

The book starts not in the middle of the Aurora Virus, which this mysterious sleeping disease starts to be called, but right before it. That is one of my favorite parts of the book, I liked the dissent from the normal world as we know it and the swift dissent into chaos as the women slowly start to fall asleep. Now, don’t feel too bad if you start to forget who the characters are, there are over 70 characters and the book starts off with a character list. And for all of these characters I think the one who got the least credit was the fox, the last character listed. A talking fox who had more emotion than our female protagonist, Evie Black.

While I was very intrigued by the idea I wasn’t quite happy with the outcome. I don’t know if that’s just me, I don’t always like Stephen King’s endings to his novels, they always seem to let me down, I always imagine the book ending differently than it did. I spent most of the book asking if what had been happening in the previous pages were actually important to the rest of the book, and I’m still not sure that half of it did, and if any of it actually meant anything.

Am I the only one who doesn’t love Stephen Kings endings? Am I the crazy one?